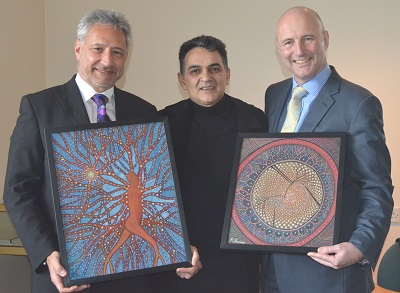 LOCAL artist and former patient Farshad Sanaee has presented Professor Philip Murray and Professor Robert Scott, who work at the Birmingham and Midland Eye Centre, with two paintings as a thank you for his treatment and care.

Mr Sanaee was treated two years ago for uveitis and underwent vitrectomy. He used his artistic skill to show the visual disability, worry and uncertainty of having an eye condition and operation, and produced incredibly detailed pictures titled ‘Vitrectomy’ and ‘In My Uveitis’.

The paintings are made up of an acrylic mix, and glow in the dark. Each painting can take up to two weeks to create. Farshad said “In ‘Vitrectomy’, I captured the amazing world of medicine as I lay watching during the surgery; ‘In My Uveitis’ was about how I felt during that period of time and the disturbing effects of my condition”.

Professor Scott and Professor Murray said “Farshad’s paintings are an incredible observation of our work from the patient point of view.”

“We are humbled by the emotional and pictorial depiction of his patient journey and extremely happy that the result gave him enough vision to paint in such colourful detail.”

Professor Scott has also been awarded the Lady Cade Medal by the Royal College of Surgeons of England for research work at the University of Birmingham and at BMEC.