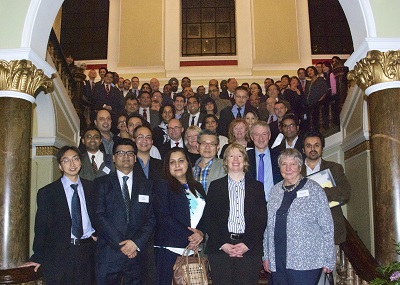 THE Birmingham and Midland Eye Centre celebrated its 190th anniversary with a full day event in the Studio Theatre at The Library of Birmingham in December.

Many former alumni attended the event, which finished with a gala dinner in the Banqueting Suite of the Council House.

Ophthalmology consultant Arijit Mitra and registrar Ian De Silva have written a book on the history of the Birmingham and Midland Eye Hospital.

Birmingham’s first eye hospital opened on April 12th, 1824, at 35 Canon Street and was known as ‘The Infirmary for the cure of diseases of the eye’. In its first year the hospital saw 1,733 patients.

In 1853 it moved to 138 Steelhouse Lane, but with outpatient demand up to 4,000 by 1862, new premises were needed and it moved again to Temple Row. Here there was room for 50 beds and the name changed to the Birmingham and Midland Eye Hospital.

In 1884 a new hospital opened on Church Street having been built at a cost of £20,000, £2 million in today’s money. In its first year it saw 15,772 patients, performed 1,200 operations and quickly gained the reputation as the finest eye hospital in the country.

The need for a larger hospital was identified in 1939, but the money raised was lost to the new National Health Service in 1948 and it was not until 1996 that the renamed Birmingham and Midland Eye Centre was opened by Prince Andrew on its present site at City Hospital.

To order a copy of the book, cost £20, please email arijit.mitra@nhs.net. All proceeds are being donated to the BMEH Alumni Association Fund.